Disclaimer: The Spruce Tools is reader-supported. We may earn an Affiliate Commission at no cost to you. When you purchase items through our links. Learn More

Something has to settle once and for all—Can you use an extension with a torque wrench without harming the cause?

Many say that an extension causes torque loss, while others go, “no, that’s impossible, according to physics.”

Then again, we know that things are always not as ideal as assumed (or overlooked) in calculations of physics. While both parties have a point, today we’ll find out if usage of extensions (of different kinds) actually causes torque loss or not, and if so, to what extent! 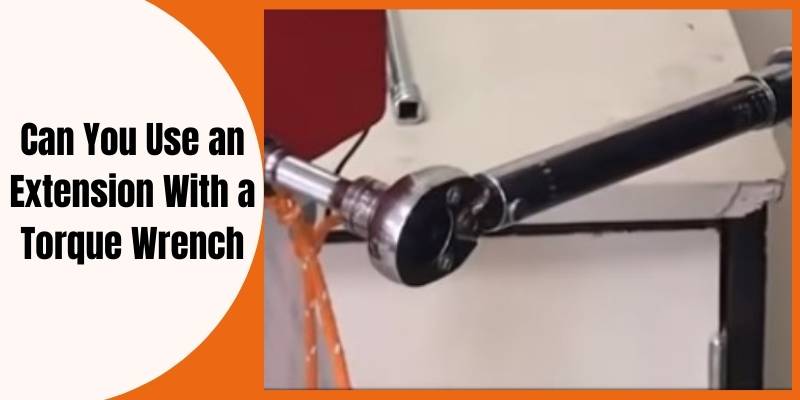 Is There Torque Loss When You Use an Extension?

Instead of talking in terms of theory, I’d like to summarize the results of an extensive test on this matter, which will answer the question in a more solid manner.

But here’s the upfront conclusion if you’re a skimmer—the extension does not cause torque loss as long as it’s perfectly perpendicular to the body of the wrench. But achieving the perfect angle is often tougher than it’s thought to be.

Let’s move on to the test itself:

A clicker was used to carry out this test. The torque figure it was set to was 34 ft-lb and to see if the wrench itself was accurate or not, it was tested with a torque measurement tool. The average of 3 readings was 34.8 ft-lb, so we could say the wrench was working pretty accurately.

The first extension was a 10-inch ½-inch drive impact extension and it averaged out at 33.7 ft-lb, which is a 3.16% torque loss compared to the baseline.

Next up, two extensions were put together making a combined length of 19-inch, and that averaged out at 33.5 ft-lb, representing a torque loss of 3.83% compared to the baseline.

At this point, no dedicated brace was used even though there was a little sag (spoiler: that’s a key reason behind the torque loss). Now that things were to be stretched further, to minimize the substantial amount of sag, a chair was used as a brace to get as accurate results as possible.

It was time for a 38-inch extension and it averaged out at 35.1 ft-lb, which actually is a 0.86% increase in torque from the baseline.

Now, while trying out the same extension but this time without the chair as the brace, it to no surprise, again lost some torque, averaging out at 33.5 ft-lb representing a 3.74% loss from the baseline.

At this point, a pattern had been found that as the extension length kept increasing, the torque loss was higher (without the brace). To see if the pattern was valid or not, things were stretched out even further.

While doing the same test with a 64-inch extension, the torque loss was 9.77% (without the brace) and 6.23% with the brace. At this point, the sag was so substantial that even after using a brace, a significant torque loss was seen.

Finally, testing out with an 88-inch extension, the results came out as 9.29% torque loss without the brace and 5.72% loss with the brace. The numbers were not exactly the ones that were expected because the torque loss was rather a little less than the 64-inch extension, but the pattern was somewhat upheld, we could say.

For easier comprehension, here’s a table summing up the results:

Remember we said that it was the sag, or the angle created due to the sag, to be more specific, which was a key reason behind the torque loss? To further confirm that, a wobble extension was used under the same setting.

In the first attempt, the extension was kept straight and it averaged out at 33.7 ft-lb as an average of 3 results as always, which is the same as the ½-inch drive impact extension that was first used.

But things got interesting when the wobble came into play. The results were fairly inconsistent when trying out different angles, as summed up below:

All these attempts were made from completely different angles, intentionally. The inconsistency of the outcome validates the hypothesis.

So, what caused the torque loss? According to physics, it’s impossible. So were Newton, Einstein, Galileo, and all the other great physicists, wrong?

It’s the angle, the culprit.

According to physics, if you keep the extension perfectly perpendicular to the body of the wrench, there should be no torque loss—and that’s actually the case, as seen on many tests. When similar tests were carried out, ensuring the conditions were met, there was no real torque loss.

But in this case, the scenario was not the most ideal, and chances are, that’ll be the case when you put things into practice. And that’s where all that torque gets sucked up.

So to settle things, yes, you can use an extension with a torque wrench without losing on torque and keeping the purpose intact as long as you can keep it perpendicular (or as close as possible) to the body of the wrench.

Adjusting for The Extension

What adjustment are we talking about here?

In simpler terms, an extension that’ll increase the effective length of the wrench will need to be adjusted for. An increased effective length will provide more leverage than default and thus will apply a different amount of pressure than intended, killing the sole purpose of a torque wrench.

Here’s how you have to adjust it:

Don’t just get lost in the equation yet. Here’s what simplifies it –

You just need to know the actual length of the wrench and the extension. That’s it. That’s the apparently obscure part, I suppose.

Desired Torque? Well, you know that—it’s the torque you want to be ultimately applied to the fastener.

When you just measure the length of the wrench and the extension, the equation becomes much easier to comprehend.

Just a little heads up, make sure you measure the length of the wrench and extension correctly. A couple of centimeters here and there won’t matter much, but don’t miss your mark by inches.

Some wrenches will have a marking on the handle for reference, and that’s the point to measure up to from the center of the drive. If the marking isn’t there, take the middle point of the handle as your reference.

Let’s do a little math now—

You have a wrench with a length of 24 inches and you have to put an extension of 4 inches on it to reach where you intend to. The recommended torque setting for the fastener is 180 lbs. What torque setting do you set the wrench on for a smooth sail?

Just to give you another heads up before wrapping it up, you need to ensure that you put your hand in the right place on the wrench—at the center of the handle. Neither at the upper end nor the bottom end.

Even though many people don’t do this and are aware of the science behind it, many don’t. Some people are just comfortable holding a wrench at the very bottom of it, and they do the same for a torque wrench as well.

That’s simply bad practice and you can already explain the reason. Yes, it changes the effective length of the wrench and you know what happens next.

William is the Chief Editor at TheSprucetools.com. He is passionate about DIY Tools. Mainly he is the owner of a tools garage with over 15 years of experience in the profession. Now he loves to research the DIY tools as well as share his experiences, opinion, commentary, to helps readers.